To understand what indie games are, and how they fit in the scene, we must first build a context. History of video games started not so much ago, but they suffered such a quick evolution in few decades.

The first video game was created in the same place where all relevant things happen: In a laboratory. Here are some nerds playing with their new experiment and taking notes of the results:

“uhm, uhm, this looks so relevant for our interest”. This game was called Space War. 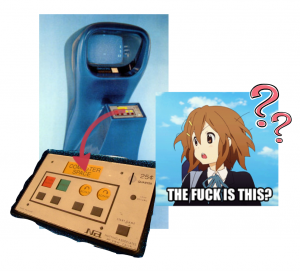 One of the relatives of the project, Nolan Bushnell (remember the name), decided to install that game in a portable “box” and expose it in recreational parks, allowing people to try it.

Unfortunately, this experiment didn’t work. The control panel was too much complex and, as you will learn later, when the player doesn’t understand how the game controls work, he gets frustrated and stops playing.

Having learned this lesson, Bushnell created Pong. It was a very simple game for two players in which each player hits a ball back and forth across the screen using a “racket”. The racket was moved using a dial knob. Intuitive and accessible:

Unlike Space War, Pong did get a big success, and gave Bushnell enough money to found Atari.

During the 70’s, everyone was hooked on video games, and people started to request domestic systems. In 1972 Magnavox launched the first home console: the Odyssey.

Odyssey was very rudimentary. It provided plastic overlays that users stuck to the TV screen to create backgrounds, and then, up to three dots were displayed in the screen. Each game assigned different behaviors to the dots. All together, the system simulated a game environment.

Here’s a modern family enjoying a wonderful afternoon, playing Pong on their Odyssey:

Atari also launched its console, the Atari VCS. Later, other companies launched their own consoles and there’s a history branch for that, but let’s move on.

Video games industry had been growing in Japan since the beginning and, from the day they put a foot in America, they totally outstood. 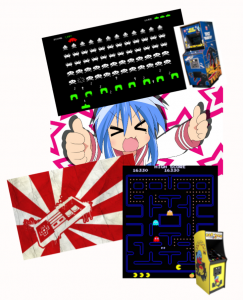 In 1978, when everyone was hyped with sci-fi due to Star Wars and Star Trek, Tomohiro Nishikado developed Space Invaders, a game about killing aliens with your laser canon. Obviously, the game had a great welcome among the Americans (and around the world).

Another significant hit of Nipponese was Pacman, where the player has to eat all the dots within a maze while avoiding the ghosts that prowl around. This product achieved a great success because it introduced a new game genre, original and different from the space shooters that where hoarding the arcade lounges.

Now let me tell you a sad story. Some years before, Atari found itself unable to produce its console Atari 2600 for such a massive number of customers. Thus, Bushnell decided to sell the company to Warner Communications.

As the evil corporation it was, Warner switched the company’s philosophy from ‘craftmanship’ to ‘profitable’.

Their first step was to prevent programmers from signing the games they produced. This was quite painful for the programmers because, at that time, games were entirely designed and developed by one or two persons. Imagine you create Pacman or something similar at your own, and then you cannot feature as the developer of that game, and besides you have to use the name of a corporation that is oppressing you.

As a consequence, some of the best programmers left Atari and founded Activision.

At the same time, Warner bought the rights to Pacman and E.T., and marked the Christmas campaign as the deadline to recover the investment. They pressed the remaining developers to finish games about those characters in less than 3 months. Those programmers were great professionals, but working demotivated and in a hurry, they produced awful games.

Warner produced millions of copies of those because it took for granted that players would blindly accept any game with the Atari logo. For Christmas, as Warner expected, people bought those games in bulk because it was an Atari product. But the day after, thousands of dissatisfied consumers returned their copies back. Warner didn’t even have enough place in its warehouse to store all the unsold and rejected copies.

And this is what leaded to the Atari game burial. Warner secretly dug a hole in the New Mexico desert and throw all those copies inside and buried them.

This is not just a tale (actually, they recently unearthed them). This did happen. As a programmer, this story triggers conflicting feelings on me.

In the one hand, I’m sad about the way Warner treated its programmers and I really understand their frustration because I’ve been treated that way. And I can empathyze with Bushnell seeing how the production of the company he founded with hope was buried in the deep.

But in the other hand, it’s satisfying to imagine Warner hiding their disgrace in the deep, and feeling too much ashamed of themselves to let people know about what they’ve done. It’s like killing a ganker in a pvp game, it brings pleasure and joy to everyone. 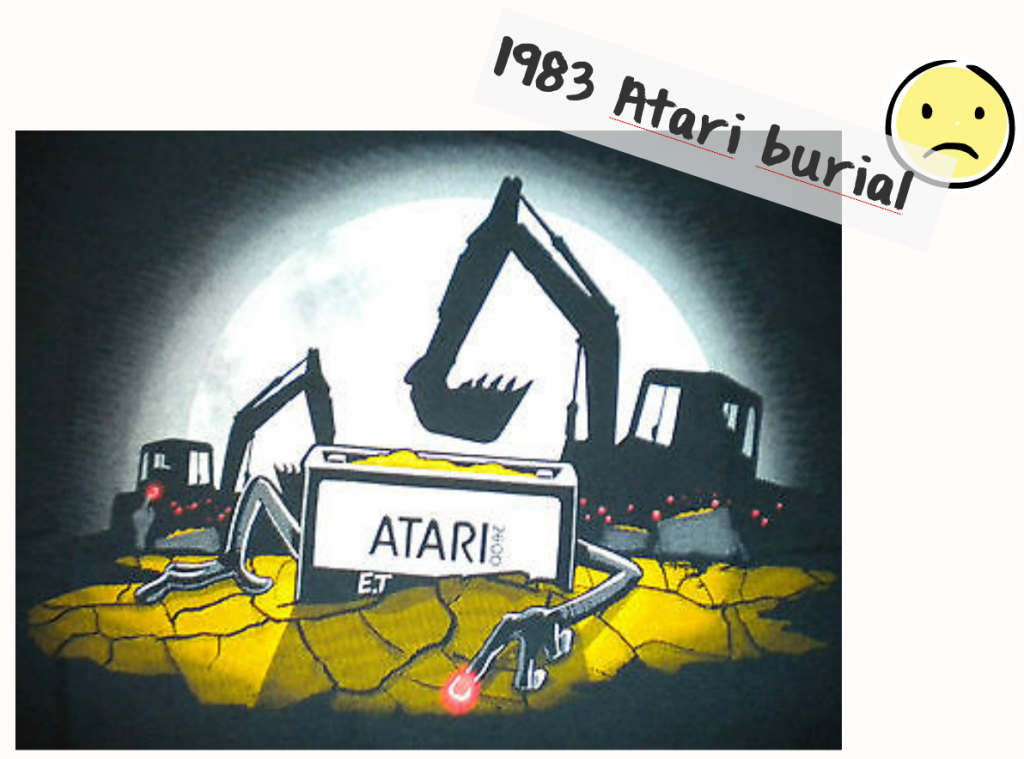 Consoles are systems optimized for gaming, but this is their only ability. Computers, instead, were back then enormous and complex machines, aimed for expensive calculations. But that changed between the end of the 70’s and the early 80’s, when Apple, Amstrad, CBM and Sinclair among others, presented their new setups (click on the links to see them).

Those systems were handy and full-dressed, providing keyboard, screen and floppy drive as a whole. They were able to accomplish ordinary routines, but most important, they supported games.

The user interacted with the system writing orders in the command line. As his programing skills increased, he would develop more detailed and useful tools, and use a floppy disk to save his code and distribute his work. This also applied for games.

Computer magazines like Byte regularly published open game source codes (known as type-in games) for readers to manually copy them in their machines. Advanced users would be able to improve that code or even create a completely new game from scratch. This eventuality causes the emergence of a new concept: User-generated content.

The coolest part is that this new content could be saved in floppy disks and disseminated among the community, which, at the same time, is modified and generates new content. 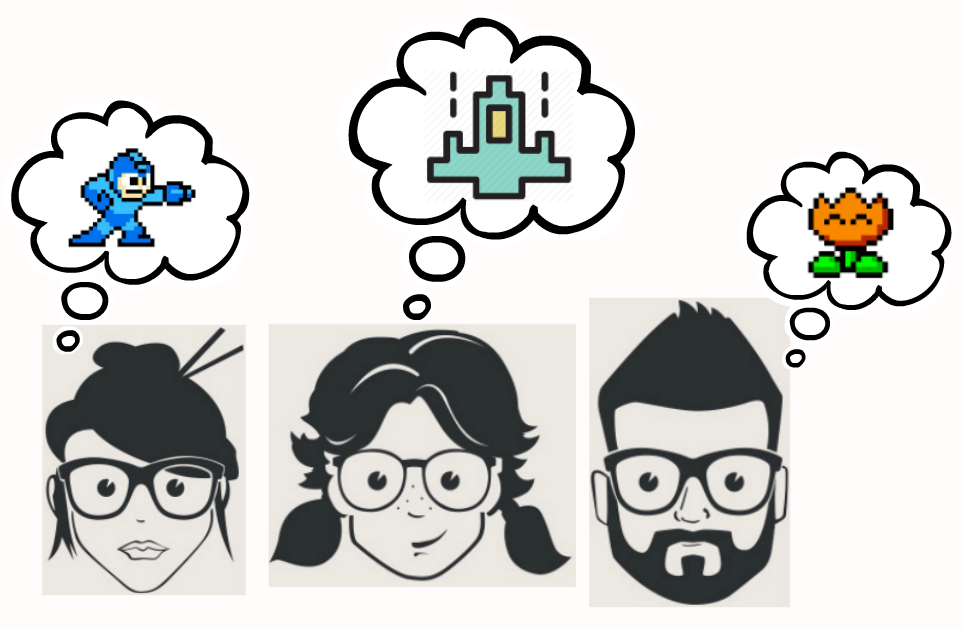 During the last decades of the century, video games industry established its place in the market. As the goal of this set of post is not games history, but indie games, let’s just sketch out these decades and move on.

The 80’s were the golden age, with innovative genres (RPGs, simulators), new hardware (NES), and the more and more fans. You may feel disappointed because I’m passing these ages so quick, knowing they were essential in video games history. I apology. Maybe I’ll write about them in the future.

The most relevant of the 90’s was the increasing awareness of violence in games, due to works like Mortal Kombat and Doom. This controversy forced companies to label their games by age range and content, fulfilling the ESRB standard.

During the 00’s, game franchises got settled up, and series like CoD, GTA, Final Fantasy and FIFA became the flagship of monopolies. Some of these are excellent games, as we will see later, they accomplish key points like game-play, history and graphics. But release after release, behind the technical improvements, there’s nothing new. The game is similar for the entire franchise.

And here is where indie developers get their chance. Adhering to their business strategy, huge corporations never gamble on innovation. They embrace the franchises they created or bought, and exploit them, generating a void in the market that claims for creativity.

So now we’ve learned some lessons from the past, and it’s time to get into the matter. Indie game developers may not be able to defeat huge companies brandishing technical resources, because they are barely financed. But they certainly highlight by their talent, crafting original and imaginative content, recovering that old-school creativity that has been lost in time. This is what makes the difference. 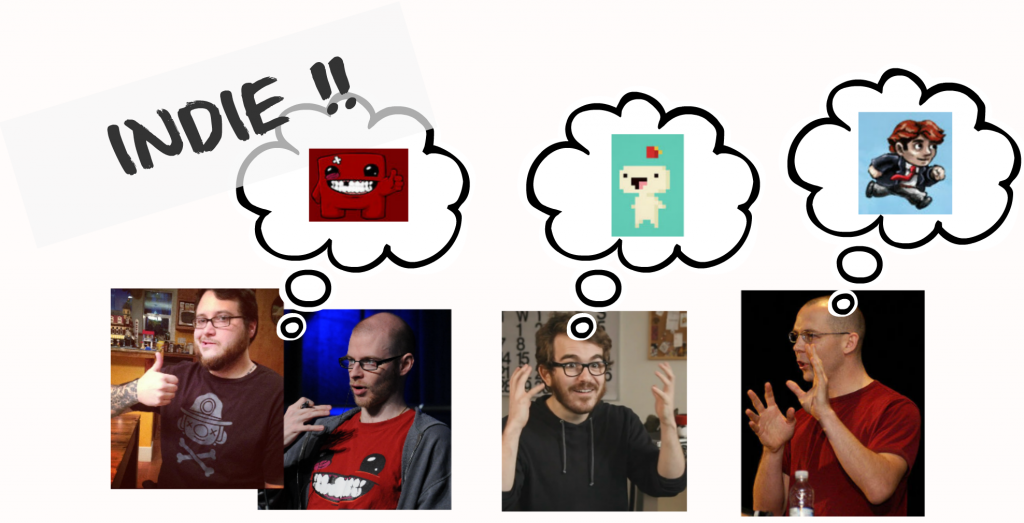