Now we know the employable tools, it’s time to get into the core. This post will be composed by two parts: Lifecycle and How to make it work.

The former makes a small tour around different steps that a game has, from its conception to its distribution, while the latter explains how to build a place on the market for your game.

Well this was quite obvious, wasn’t it? You need to have an idea. Do not deify this: It doesn’t have to be an awesome idea. It could be something you like and that may fit in a video game environment.

Start with a brainstorming about generalities: games you liked, characters you imagined, past considerations… Some people base their games in childhood experiences and dreams. In my case, I tend to use anything related to cats ¯\_(ツ)_/¯

Gather the elements that suits you most and think about how to adapt them within a game.

Speak with others about your idea during this process. It is essential to receive feedback as quickly and frequently as possible, so don’t be afraid to show your work with other people from the very beginning. Feedback gives you an external vision from which you may learn.

Now it’s time to begin shaping the project. What kind of game would you like to create? What levels will it contain? How is the player going to interact with your game? 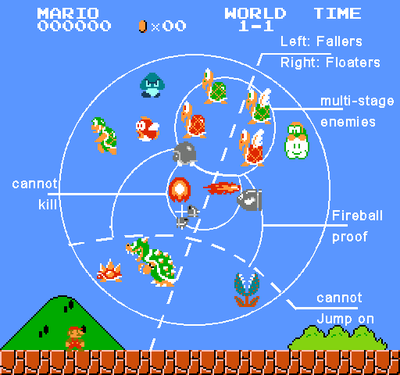 Consider how is the player going to use your game: Point of view, controls, mechanics, progression… As we will learn later, the gameplay is the most important element of a game. So take your time to conceive it.

A prototype is an early sample of the game, built to test it in a real environment. You should release prototypes regularly, as we learned before, feedback is the key. Having your prototype tested by real users allows you to check its suitability and discover issues and opportunities on the game.

Also sometimes, you may find difficult communicating to others what you have in mind, and a mock can solve many doubts.

Whenever you feel ready for this, remember to keep things simple. Do not try to design the whole game from the beginning. Although it is ok to have a general concept of it, start designing a first short level and adapt it depending on emerging concerns and feedback. Then show it again, receive feedback, and adapt. At some point you will feel enough confident to go on designing new features, maybe your players by themselves will ask for a new level!

Use placeholders to avoid getting stuck waiting for the designer to finish his work.

Usually one single person is not specialized in many disciplines, therefore, you will need to join someone that covers your lack of skills, someone who takes care of music, drawing, writing, programming… A bit like in Bakuman.

It is very important to apprehend with whom you can count on, and with whom not. You must be severe when deciding who is still involved in the project. It is a good idea to write some rules and address to them when hesitating. I personally like how YandereDev manages this, being strict and assertive:

You should not volunteer for Yandere Simulator unless you can show me examples of your previous work.

If you have been given a task, and I don’t hear from you for longer than a week, I will presume that you have left the project.

In certain situations, I may intentionally give multiple volunteers the same task, in anticipation that one of the volunteers will fail to complete the task.
You must accept the possibility that your work may be discarded in favor of superior work.

He writes a list of people that is apparently interested in collaborating on the project, then rejects the ones that are misaligned and the ones that do not deliver. This requires the owner of the project to include management and leadership skills, which may probably be out of its confort zone.

This means getting to work. You must set a work process.

If you take a rash approach, you will suffer the “matchstick effect”: Blazing fiercely at the beginning but quickly getting burned.

There’s a whole science behind this, but if I had to summarise and highlight something, I’d say the most important is to be methodical: Organise your time, set deadlines, decide how are you going to coordinate with your collaborators.

Frequently (once a month) make a retrospective to analyse how things are going, what is working, and what needs to be improved.

You need to make yourself known. Tell the world what you are working on. Use the internet, social networks. Blogs, magazines, podcasts, youtubers… everyone has to notice you.

Attend conventions and participate in game jams. Give conferences. Write on your blog.

By letting the community meet your project, you may attract new collaborators and also investors.

And finally, when your game is complete, use distribution platforms to sell it (Steam, Origin, Mobile apps stores, Xbox and PS stores…)

How to make it work

Learn from the history. As we’ve seen before, history can teach us many lessons. Player interaction must be simple, like in Pong. Take advantage of the current fashion wave, like Space Invaders did. Be unique, like Pacman. Favor motivation over greed.

Learn from the wins and fails that others made along the way.

2. Think about one person

Do not think about designing a game for a group, for a country, for a community. Design your game for only one person. One single person. This will make your game evolve depending on the feedback from that person prototype, and become the perfect game for it.

What makes videogames different from movies or books is that the player modifies the game’s story with his interaction. It is essential for the player to feel immersed in the world of the game and able to interact with it in an intuitive way.

This game teaches you how to play while playing it. None of the components of the picture above are positioned randomly. First of all, the main character, the one that you drive, is situated in the left corner, looking towards the right side. The is no world towards the left, but there is towards the right, and the character looks interested on it.

Once you realize which way to go, you will meet the first monster, which is irremediably running your way and will probably kill you for some tries until you understand how to kill him instead. And by this moment you will be able to both jump and kill monsters.

Now let me present a good example of an awful game design: 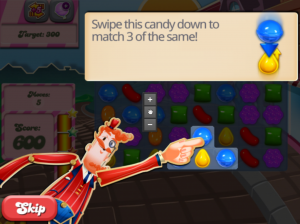 This game needs to intrusively tell you how to play. First of all, there is a black curtain that hides everything else in the screen. Then there’s a character pointing the blue candy, and also a giant dialog explaining the player what he has to do with the candy.

The first and most unforgivable error this games perpetrates, is to separate the player from the game. In the Super Mario example, the player is immerse in the world, therefore there is an intuitive interaction.

In this other example instead, the game is telling the player that there is a real world, and then there is the game’s world, which needs to set up a bunch of dialogs and pointers to explain him how to interact with this alien world.

The plot is another important point on a game. Just like in a book, the story must be thrilling and entertaining, the characters should be charismatic so the user wants to continue playing just to know how the outcome will result.

I’m using this image to illustrate this idea:

Don’t you wonder what happened? Why are these guards going after him? What is he carrying in its arms? Is it something that he stole? Will he be able to scape?

Well, this image is a concept art from a Disney movie, but it helps us understand better what a plot should be like. If the story intrigues the player, then he will be encouraged to continue playing.

A game must provide goals continuously. In a game, a goal is a reward. The player faces a challenge, and receives a reward if he is able to overcome it. The most important point here is that the reward must be directly proportional to the effort that the player makes. He must feel fulfilled after making this effort.

The reward itself is also relevant. For instance, if the player beats a dragon and a powerful sword is dropped from it, he will be eager to use it in the next adventures.

In the other hand, the game must be balanced. It shouldn’t be too difficult, nor too easy. This reminds us the tip about designing a game for a single person, because you know the limitations of that person. When is it a game too difficult, or too easy of him?

If the game is too difficult, the player will get frustrated. If it is too easy, then he will get bored. And in both cases, he will leave the game.

Therefore, provide a balanced difficulty, and reward your player after his efforts.

Another great point are the graphics. A video game is, after all an audiovisual production: Graphics are relevant. But this does not mean that they must be realistic graphics. Usually, indie developers can’t afford this, however, this could become an opportunity.

Creativity and imagination is what gives indie graphics their appeal. Look at the graphics from Limbo, for instance: 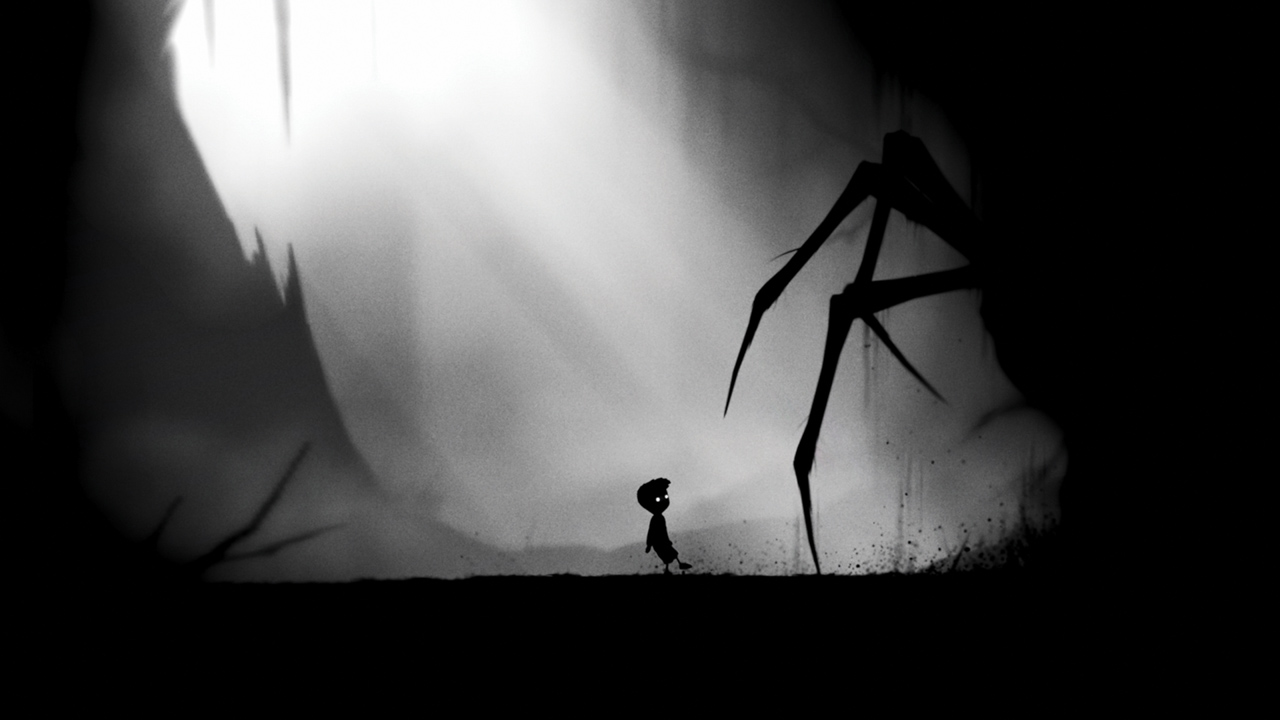 The graphics are not realistic, still they are awesome. In the one hand, they create an atmosphere and submerge the player into the world. In the other hand, they represent a house brand. These graphics represent Limbo.

As well as other graphics represent Fez, with its elaborated pixel art and comfortable ambience.

Some companies also realised this fact and deliberately introduce indie styles on their games. Such is the case on Child of Light, a game generated by Ubisoft with watercolour-looking drawings.

The last thing you need to create a video game and to make it work, is to be strong. You must be resilient. Developing a video game is hard. It is a very personal project into which you put your heart.

Therefore, in the moment when this project appears on the internet, and you start being widely criticised, you may get hurt. Usually, the critics on the internet are useless, because when people can share their opinion about something anonymously, they don’t care too much about what they write.

Your main effort here is to filter and proceed all the comments, and extract from them the constructive ones. Deeply, underneath all of them, your person is there. That person for whom you designed your game, he is probably writing comments for you, explaining that he likes your game, but that it is too difficult for him, or that he is not getting thrilled by your story, or something else.