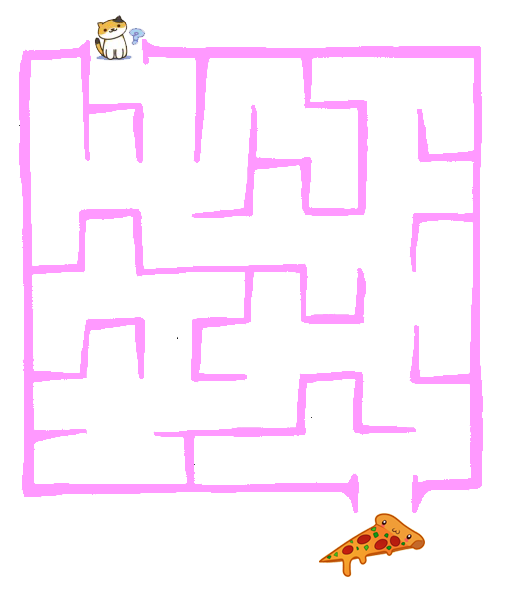 Today I’ll write about Pathfinding. Pathfinding is the plotting of the shortest route between two points. Applied to videogames, it is a process through which the AI calculates the most suitable route to get from a starting point to the goal, even across mazes.

gdxAi provides an API for this feature, the (obviously) named Pathfinding API. While steering behaviors were the best option to pursue dynamic targets, pathing is optimized to pursue static targets. Thus, I implemented it on the kitten’s movement towards a waypoint.

Before getting into the code, I’d like to explain some discrete mathematics basics to depict the context somehow.

Pathfinding is solved using graphs. The graph theory is the study of graphs, which are mathematical structures used to model pairwise relations between objects.

Its main elements are: 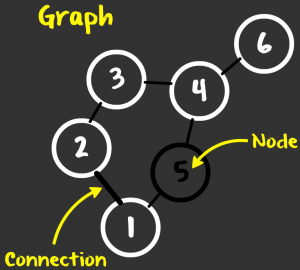 The Pathfinding API provides tools to transform these abstractions into code.

Applied into the game, this is how I managed to implement graph’s elements:

The graph is the game’s map (MapModel because of my MVC structure). This class contains the list of nodes, and the methods through which access them. 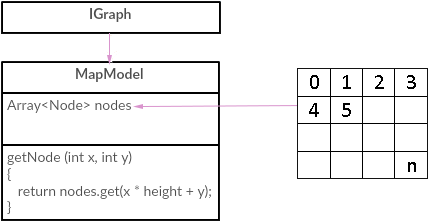 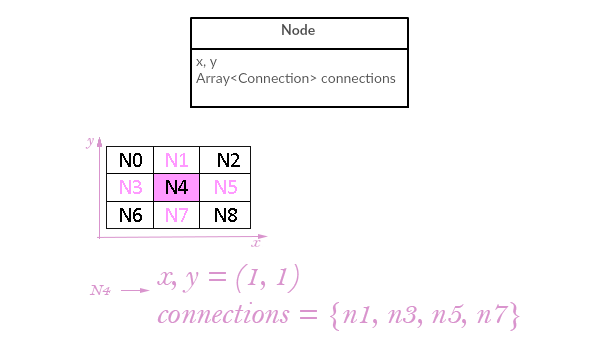 You could allow diagonal neighbors, but that’s another story.

This class contains a reference to both start and end nodes, and the cost of going from one to the other. In the example below, there are two ways to get from the node ns to the ne, but the red path costs 6, while the green one costs 4. Pink nodes are collidable nodes or obstacles.

Once we’ve gathered all the elements, we can use them to find the shortest path between two nodes. The algorithm I’ve used is the Indexed A* algorithm, which is an improved variation of A*.

As explained here, the higher performance of the Indexed A* lies in the way it marks the nodes.

A* uses two lists of nodes, the “open list”, and the “close list”. The algorithm explores each node, creates a node record for it, and decides whether it is suitable for the path or not. In the former case, the node record is added to the close list, while in the latter, it is added to the open list. Later, both lists are iterated to search for a node record corresponding to a particular node, and this is somewhat time-consuming.

Indexed A* uses categories to mark nodes as “Open”, “Closed” or “Unvisited” instead of maintaining two lists. Node records are accessed directly using an index, and provide the category of the node you are asking for.

The algorithm itself is contained inside IndexedAStarPathfinder, my custom implementation of gdxAI PathFinder interface:

As you can see, the path finder receives a start node, a goal node and the heuristic, and outputs a path.

This path is an array of nodes whose first value is the start node, and the last one is the goal node. The nodes in between are a set of nodes that are connected among them. The path fulfills these requirements:

After calculating the path of nodes, we want the affected entity to follow that path. This is performed using the FollowPath behavior. This behavior is fed by a steerable agent and a path, leading to something like this:

There’s a quite tedious issue here that I want to complain about: Why the hell FollowPath receives a LinePath type, while PathFinder returns a GraphPath?? Couldn’t they make an adapter or something? 🙁

The point is that, in order to use this behavior, I had to develop a disgusting parser that iterates through nodes and creates a LinePath:

At the end, the goal was to implement pathfinding to get a kitten reaching the waypoint inputted by the player. This is how everything fits together:

PA: The code above does not show the exact implementation, as I eluded all the MVC abstraction layers to avoid messing the code excerpt.

> The complete and real implementation can be found on github.

If you run the game, you may notice that when you click over a kitten and start the drag, a path of paws is drawn. This means that, as long as you don’t release the mouse, the path is calculated each time you change the position of the cursor.

I added this feature because it was quite helpful for debug and it turned out to be useful for the gameplay as well.

This will draw the potential path just for you to consider it, without applying any behavior to the kitten. Do you like it?

I must confess that this has been one of the hardest tasks I’ve faced. The more troubling part was the parsing. Besides the unavoidable fact that pixels must be parsed to nodes and vice versa, (which was a nightmare by itself), the path received by the behavior is different from the path generated by the pathfinder! Seriously, that was a terrible idea. Sometimes it was hard to identify if a failure was caused by a bad implementation of the algorithm or by a conversion process.

I have that damn mania of twisting my hair between my fingers when I’m nervous, thoughtful, concentrated, or a combination of these states. Well this week, the hairs that have not been broken or fallen, almost become dreadlocks.

It was also difficult to erase the precalculated routes each time the mouse was dragged to another position. At first, all the precalculated routes were staying visible, and the screen became so full of paws that it looked like someone left a lot of cat food at the other side of the map. And I couldn’t find out why!! Although I was completely burned out at that point, so maybe the problem was actually not that bad.

But hey, you know what? After all the suffering, pain and extreme torture, one day the kitten started walking down a splendid (and unique) path, and I did start mourning and called my husband and told him that “eureka”. True story.

Thanks for reading and sharing! And remember that you can collaborate with this project sending your drawings ^^.

BTW, I noticed that the spam filter was preventing truly human users to post their comments, but now it is fixed.