I’m applying for a job in a frankly interesting company, so I’m reviewing all the good programming practices I was taught and learned during my career. Those are essential for developing good code, however an alarming number of “programmers” don’t really understand them (or actually never heard about them).

In this and subsequent posts I will try to explain fundamental coding principles, refactor techniques, design patterns and so, as clearly as possible, and probably using ailuromaniac examples. Today we’ll speak about the SOLID principles.

SOLID defines the five basic principles of object oriented programming. When applied together, these principles will make a software easily maintainable and extendable. wiki

Robert C. Martin relates the concept of “responsibility” with “reason to change”:

A class should have only one reason to change

Take a look at this class:

It is obviously bearing with more than one responsibility because it has methods for a lot of different and unrelated actions. For instance, setSkin has nothing to do with calculatePathToDestination, because the color of the kitten’s fur has no effect on the calculation of a path.

The right implementation encapsulates each responsibility within objects, and the class Kitten is only dedicated to gather those objects by composition:

Now each class will have its own reason for change, and Kitten will barely do.This also means that when a class changes, none of the others will be affected by this change.

A class should be open for extension, but closed for modification. This means that your super classes should be enought generic to be extended by their childs as they are.

In the code below, the class Cow extends the class Animal and implements its abstact method eat:

This does not work, because cows are vegetarian, but we are forcing them to eat meat. 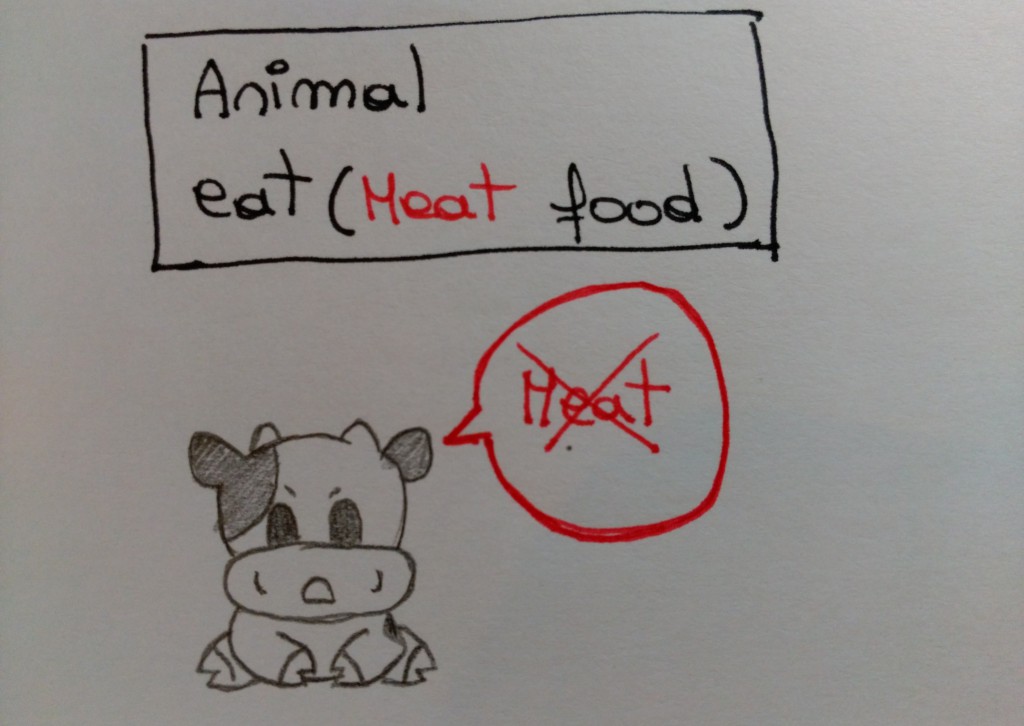 But if we abstract the type Meat into an interface, such as Food, not only cows, but all the animals will be able to use the eat method as they prefer:

Meaning, the Animal super class is enought generic to be extended by a large and diverse amount of creatures as it is, without modifications:

And they will be happy and forever live in harmony.

In my opinion, this is one of the more complex and misunderstood principles, along with the dependency inversion principle.

It states that objects in a program should be replaceable with instances of their subtypes without altering the correctness of that program. Also explained this way:

Yeah well, this is quite abstract, let’s see it on a practical example.

If we try to replace Animal by Kitten, the system will fail, because the method pet() overriden by Kitten does not work in the same way as beHappy(). Same for Dog. And Scorpion does not even need the pet() method because seriously, did you ever try to pet a scorpion? Moreover, it breaks the YAGNI principle.

We cannot replace the type Animal by these subtypes. This violation can be solved extracting the pet() method from the superclass to an interface, this way:

So now you could replace the type Animal by any of its subtypes, and it will still work, because pet() is no longer Animal‘s method, but Touchable‘s method instead. 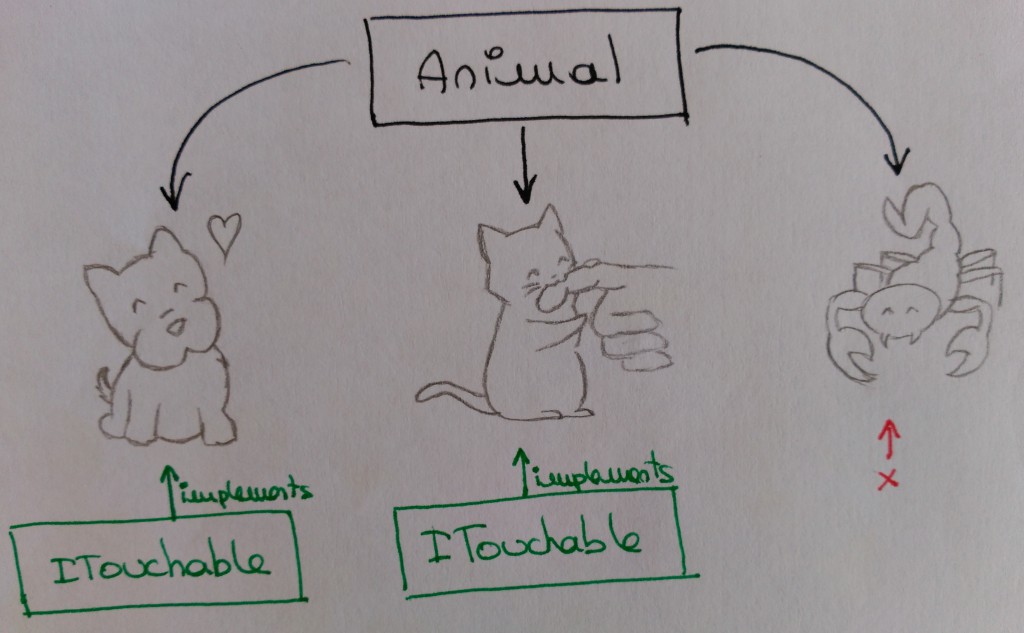 BUT pay attention, because the code below does NOT violate the Liskov principle:

This implementation respects the principle because, as long as the precondition gluttony = 0 is true, the class Animal can be replaced by its subtype  Kitten and the system will be delivering the same result.

One of the best things about Liskov’s principle is that by applying it you are unconsciously forced to program by composition instead of inheritance, which is also a very important principle.

Many client-specific interfaces are better than one general-purpose interface.

Your interfaces should be as small and specific as possible. This will allow you to reuse them and also to avoid forcing classes to depend on methods thay they do not need.

As you can see, it gathers everything that a physical entity may need. Here are some classes that implement this interface:

Notice that many methods were not actually needed. But if we split our huge interface into smaller ones, this way:

Then each class will only implement the interfaces that is needing at this moment, and we can get rid of unused code:

You can eventually add or remove interfaces from your classes as the specs change.

Personally, I like this principle because it makes classes more readable, for instance, extending the example above, you can quickly know the properties of an object:

It’s just like reading prose: Kittens can move (Mobile), can be petted (Touchable), can be set as a target (Targetable), and so on.

Depend upon abstractions. Do not depend upon concretions.

This violates the rule because the object kitten is declared using a concrete type (Kitten). This is how you should have done:

We declare the object as a generic Animal, and then we assign to it an instance of the concrete type we want that animal to be.

It’s quite simple and actually I don’t think the problem with this principle is that it is misunderstood, but more like it requires a very much strong self-discipline. For instance:

Would you say that this code is SOLID?:

behavior is (very OK) declared as a generic type (Behavior). But then, in the constructor, we are assigning it an instance of KittenBehavior, which is a concretion. And we are giving this responsibilty to Kitten. From now on, our class Kitten will be eternally coupled to the KittenBehavior type.

But if we do this way:

And decide the type in the invocation:

Then Kitten will no longer depend on this concretion. This technique is called dependency injection, and allows us to indeed inject the concretion from outside the class, releasing it from a responsibility that does not deserve.

I’ve always been an organized person. Some people may call it OCD but well, I don’t think it’s so bad.

So you could say SOLID was an epiphany for me, because before we met I was very uncomfortable with my code but didn’t know exactly what was wrong with it. Now I know that EVERYTHING was wrong. From that day I’ve learned quite an amount of techniques and rules, and honestly, the more I discover, the dumber I feel.

Adopt programming practices that “attract” correct code as a limit function, not as an absolute value. […] you will create what mathematicians call an “iterative dynamic attractor”. This is a point in a state space that all flows converge on. Code is more likely to change for the better over time instead of for the worse; the attractor approaches correctness as a limit function.

The painfully implication of this statement is that, despite our efforts, our code will only pretend to be good, but never achieve absolute perfection.

But well, you will always be closer to perfection if you are well trained, so I’ll try to gather and demystify some of the key coding skills here. Besides, trying to clearly explain something is one of the best ways to realize that you actually don’t understand it.

In another vein, during this post I’ve been doing what we know as Refactor, a process through which the code is reestructurated without changing its external behavior, aiming to improve the quality of the software. I’ll be writing about it later in this blog, but if you feel intrigued read this.

Also in the incoming posts we’ll explain some design patterns and, buddy, you should know about them.